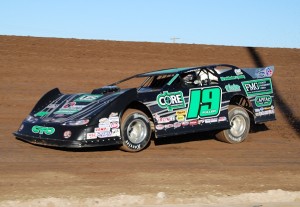 While a majority of the country is underneath snow or water in January, Arizona welcomes warmer temperatures and the start of the 2013 racing season. Central Arizona Raceway kicked off the tradition with the Wild West Shootout featuring Super Late Models on Saturday night. Twenty-five cars were on hand for the $3,000 to win event and Tim Fuller of Watertown, New York topped them all.

Rodney Sanders made his Late Model Debut and finished fifth.

Pat Doar of New Richmond, Wisconsin and Billy Moyer Jr led the field to the green flag. Moyer, racing on his birthday for the first time, jumped to an early lead before a caution was brought out. When the green flag dropped Fuller began his charge to the front and Justin Kay followed. Moyer Jr shuffled back as hometown hero RC Whitwell and Shane Clanton began their march forward. Fuller worked through lapped traffic flawlessly with Kay remaining in a close distance. Behind him, Rodney Sanders of Happy, Texas broke his way into the top five in his Late Model debut.

Billy Moyer from Batesville, Arkansas charged from 22nd to 9th.
RC Whitwell of Tucson, Arizona ended 2012 winning seven of ten races in his home state and opened 2013 with a third place finish.