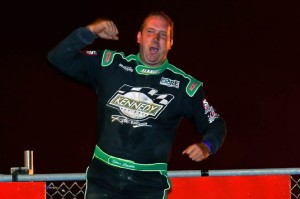 The 36-year-old World of Outlaws Late Model Series regular dominated the 100-lap A-Main, surging off the outside pole starting spot to lead the entire distance. He pocketed a $100,000 check – the richest first-place race prize in the dirt Late Model division.

With Clanton having won the World 100 at Eldora in 2008, he became just the fifth driver with victories in both of the high-banked, half-mile oval’s crown-jewel events. He joins a select group that includes Scott Bloomquist of Mooresburg, Tenn., Donnie Moran of Dresden, Ohio, Billy Moyer of Batesville, Ark., and Jimmy Owens of Newport, Tenn.

“To win the Dream is a dream,” said Clanton, whose best finish in five previous Dream A-Main starts was third in 2008. “It’s a hundred-thousand to win and it’s the biggest race we go to every year, so to win it is special. But to win the World also, which is the second-biggest race – prestige can’t get no bigger than these two races.”

Driving a Capital Race Car chassis that he began building last year with former Dirt Track World Championship winner Marshall Green, Clanton recorded his first national-level victory since joining the Kennedy Motorsports team for the 2012 season. He pulled away late in the race to defeat John Blankenship of Williamson, W.Va., by a commanding margin of 3.149 seconds.

“It’s a big confidence builder for sure,” said Clanton, who sits fourth in the WoO LMS points standings but has yet to reach Victory Lane this season. “The best in the business were here. We showed that we could do it here, (so now) we should be able to do it anywhere we go.”

Clanton certainly had good fortune on his side during the Dream weekend – most notably, the three-car heat-race invert gave him an outside-pole starting spot for Saturday’s fifth prelim and he took advantage of it, winning the event to earn the second starting slot for the 100-lapper. But he needed more than the right breaks to fulfill his ‘Dream’ scenario.

“It takes Lady Luck (to win) at a lot of places – and this is one of the biggest places (it’s needed – but I always say luck gets you to the race and you gotta have a good car to finish it,” said Clanton. “We had both tonight.”

Blankenship, who started ninth, inherited the second spot during a lap-23 caution period when five-time Dream winner Bloomquist was moved back one row (to fourth place) by officials for jumping Clanton on that circuit’s initial restart. Blankenship drew within striking distance before a caution flag flew on lap 44, but he gradually lost ground after the restart and couldn’t stay with Clanton following the race’s third and final caution, on lap 66.

“We had a great car,” said Clanton, hailing his Clements-powered machine that was wrenched by Jonathan Owenby, who returned as Clanton’s chief mechanic just over one week ago, and Buddy Chapman. “I could go hard for five, six laps, and then I’d just maintain the pace. The last 20 laps I didn’t see nobody in the infield (giving signals), and I was just driving, making my laps, and maybe the end of the race would hurry up and get there.”

Blankenship, 30, turned back a late challenge from Lanigan to register a career-best finish in his third career Dream A-Main start. The $20,000 runner-up prize was also the biggest payday of his career.

“It’s a bad race to come up short in, but the car was awesome,” said Blankenship. “Clanton’s (car) was a little better – kudos to him, he ran a great race.

“I would’ve liked to get up there with him in the lapped traffic and mixed it up a little more; I felt like my car real maneuverable. But when (Clanton) was up there on the top he was just just a tenth or two better every lap.”

Lanigan, 42, made another strong bid for his first Dream victory since 2003 but fell short, settling for third in his Rocket, nearly three seconds behind Blankenship at the finish. He reached third with a lap-66 restart pass of fellow WoO LMS regular Clint Smith of Senoia, Ga., and, on lap 84, actually slipped ahead of Blankenship for second momentarily but he couldn’t make it stick.

“We burned our right-rear tire off and got too loose,” said Lanigan, whose sterling Dream performance record now sports nine top-five finishes in 14 career A-Main appearances. “We just got it hot trying to pass (Blankenship) and had to settle down for a while. We actually came back a little bit at the end, but it was just too late.

“Clanton was awfully good up there anyway. I don’t think I could’ve beat him.”

Smith, who moved forward from the seventh starting spot to run third for laps 45-66, was hampered by a worn right-rear tire after the race’s final restart and slipped to sixth at the finish. Eddie Carrier Jr. of Salt Rock, W.Va., quietly was the race’s hard charger, finishing seventh after starting 26th thanks to a fast-time provisional. Brian Birkhofer of Muscatine, Iowa, was eighth, two-time Dream victor Moyer placed ninth after damaging his car’s right-rear spoiler when he clipped the wall while battling for sixth on lap 66 and 19th-starter Chris Madden of Gray Court, S.C., rounded out the top 10.

Three caution flags slowed the 100, none for major incidents. WoO LMS traveler Chub Frank of Bear Lake, Pa., slowed on lap 23 and retired to the pits for a 25th-place finish; Steve Shaver of Vienna, W.Va., fell off the pace on lap 44; and debris on the track tightened the field on lap 66.

Bloomquist was an early contender, moving up from the fifth starting spot to grab second on lap 20 from polesitter Brian Shirley of Chatham, Ill. He settled into third after his lap-23 restart jumping penalty but fell back after the lap-44 caution, finally pulling off on lap 66 while eighth due to mechanical trouble.

Defending Dream champion Don O’Neal of Martinsville, Ind., was never a factor in his bid to become the race’s first back-to-back winner. He started 14th and pitted during each of the three caution periods, failing to crack the top 10 even briefly en route to a 16th-place finish.

Ninety-eight cars were signed in for Friday night’s time trials, which saw Pearson record the quickest lap at 15.476 seconds. He had to use a fast-time provisional to start 25th in the Dream 100, however, after being knocked out of third place in the first heat when he clipped Jared Landers of Batesville, Ark., whose car spun out of second place in a cloud of smoke in turn one and collected fourth-place Jimmy Owens of Newport, Tenn.

The Heat 1 incident ended the nights of both Landers and Owens, whose streak of eight consecutive Dream A-Main starts was snapped. Landers’s Clint Bowyer Racing teammate, Jonathan Davenport of Blairsville, Ga., also had a short evening, dropping out of the second heat when his engine lost power as he ran second.

New to the Dream program this year was a pair of five-lap ‘Scrambles’ for drivers failing to earn transfer positions in the B- and C-Mains. With each sprint offering a $1,000 top prize and full DIRTcar UMP points, Josh Richards of Shinnston, W.Va., captured the ‘B-Scramble’ and Chris Wall of Holden, La., won the ‘C-Scramble.’

Saturday’s qualifying action was marred by a wild accident on lap eight of the sixth heat involving former Dream winner Jimmy Mars of Menomonie, Wis. He barrel-rolled several times in turn one after being squeezed into the outside wall while battling for second with Dale McDowell of Chickamauga, Ga.

Mars was not injured and quickly climbed out of his badly damaged car under his own power. He was not happy with McDowell.

“It’s disappointing because we had a real good car,” said Mars, who had charged forward from the seventh starting to contend for victory in the heat. “I had one groove; I guess Dale had five. I was alongside of him and he kept going up, and you see what I got.”

“My apologies go out to Jimmy,” said McDowell. “I was racing the 7 car (Kent Robinson), and the way these seats are with no radios you don’t know when somebody’s to your right rear. I had no clue (Mars) was out there or I’d have left him some room. When I felt him I moved my head forward and looked out the right side of the seat, and all I saw was the underneath of his left front.

“I hate it for him. I feel terrible that it happened. It definitely was nothing intentional. Jimmy and I are buddies, and I feel bad for him.”

While Clanton, Lanigan, Smith and Frank represented the WoO LMS in the Dream A-Main, four other tour regulars failed to transfer to the main event.

Tim McCreadie of Watertown, N.Y., who ran his backup car in the weekend’s action after smacking the wall with his primary machine during Friday’s hot laps, was the most high-profile World of Outlaws non-qualifier despite starting from the pole position in Heat 3. He ran second in the prelim until a late caution flag set up a double-file restart that cost him dearly as he fell to a fifth-place finish. Later, he dropped out of the B-Main while running eight spots out of a transfer position.

Other Outlaws who fell short were Kent Robinson of Bloomington, Ind., who never recovered after falling from second to fifth on a double-file restart midway through the fifth heat; Bub McCool of Vicksburg, Miss., who missed transferring by four spots in the B-Main; and John Lobb of Frewsburg, N.Y., who finished 19th in the C-Main but did join his Kennedy Motorsports teammate, Clanton, in Victory Lane.

Brandon Sheppard of New Berlin, Ill., meanwhile, qualified the Rocket Chassis house car for the Dream with a runner-up finish in the B-Main and placed 19th (one lap down) in the 100-lapper. Josh Richards, who made his first dirt Late Model start since vacating his father’s Rocket house car to take a NASCAR Nationwide Series ride, missed the B-Main cut by three spots in the Ernie Davis-owned No. 25.