Capital Race Cars has impacted the sport of dirt late model racing scoring numerous Championships titles along with hundreds of victories across the country. 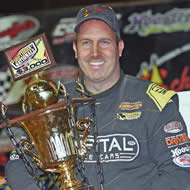 NO COPIES
Capital Race Cars is an original design- The first Capital Race Car took two years to design & build. Marshall Green & Shane Clanton spent hundreds of hours in the design process because they wanted Capital to be an original-one of a kind chassis. No copies!  The chassis was never intended to be mass-produced. After much trial & error, the first and only Capital of Shane Clanton started to have success, and consistently made it to victory lane.  The calls started to come in with many who wanted to get on the ground floor of the new chassis company. After much thought and prayer, Marshall along with his wife Mia, decided to sell the first Capital Race Car.  That first Capital was sold to Casey Roberts. Casey won numerous races in that first Capital and went on to claim two consecutive ULTIMATE Series Championship titles. Since then, Capital Race Cars has intentionally progressed with gradual growth remaining true to the original goal of being a small chassis company with BIG RESULTS.